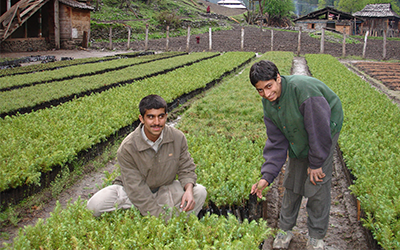 Neelam Valley, 144 km long bow-shaped with majestic pine, fir and deodar trees, lies north-south of Muzaffarabad ,Pakistan-administered Kashmir (PaK). Nearly all the forest wealth of PaK is to be found in this valley. Despite this rich natural wealth, the valley is unfortunately the poorest region in Pakistan. Poverty is an imperative for the rural poor living in this region. One of their greatest needs is firewood to cook food, boil water, and heat their homes. The firewood consumption of each household amounts to about 500 Cft. of wood (Deodar and Pine) per annum in this area (Dept. of Forest, GoAJK, 2008). These families use traditional food preparation techniques, which typically consist of three stone stoves.

The traditional stoves consume almost 70% more firewood as compared to improved stoves and produce more smoke, which is a threat for the women and children health (Liz Bates, Bruce and Daniel 2007). Keeping these issues in view we work to improve health and the environment of this area by adopting participatory approach in the development and dissemination of fuel-efficient stoves. This is not only benefiting the environment, but also reduce the cost of fuel and produce less smoke than traditional stoves and ultimately  improving women and children’s health.