The constitution of Pakistan enshrines commitments towards gender equity and inclusion. However, despite these constitutional commitments, Pakistan’s gender inequity index value is 0.552 which is critically low and places the country at 141 out of 142 countries surveyed by the World Economic Forum in 2014. The plethora of issues which have led to such a sorry state of affairs in gender inequity in Pakistan requires an examination of gender gaps in humanitarian responses and development priorities, the need for structural and systematic shifts and strategic implementation of interventions, policies and programs regarding women, girls and minorities, in order to respond in an effective manner to the multiplicity of gender-based exclusions and lack of access to rights.  In Pakistan, a majority of women, girls and minorities face gender-based disadvantages and do not have access to the rights laid down in the Universal Declaration of Human Rights and the Constitution of Pakistan. A significant inequality exists in the statement of principles and the reality on ground as far as women and minorities are concerned. 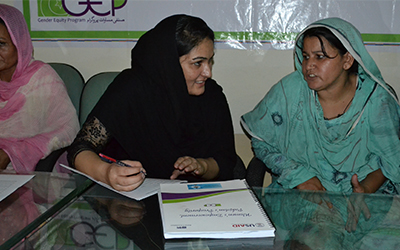 In Azad Jammu Kashmir (AJK), as in the rest of Pakistan, the issues of women’s deprivation and lack of access to justice and rights are rooted in traditional socio-cultural values, embedded by tribal norms and compounded by religion. Violence against women in AJK is the most powerful mechanism used by family, society and the state to silence the voices of resistance against a social order based on gender. Women in AJK lack access to justice and do not enjoy rights enshrined in the constitution of Pakistan. The cases of gender-based violence are not registered because women do not have easy access to the Police Stations. There is also dearth of legal experts working on gender-specific laws. This practice has encouraged a social order based on male domination and women subordination to further entrench itself and continue without much resistance. This situation needs specific interventions on the part of rights-based organizations and Human rights groups to start awareness campaigns to capacities women and minorities in gender-specific issues involving access to rights and justice.  These interventions should impart awareness regarding rights-based international covenants, the national laws, policies and programs on elimination of any form of discrimination against women, minorities and the less privileged in society. 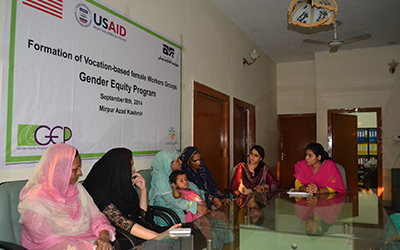 their basic rights. The women workers are treated discriminately as compared to their male workers.  They can be easily fired from job without any resistance. They can be easily re-inducted on comparatively low wages. They are denied their legitimate facilitation rights at the work place. A number of labor laws exist in the country for the protection and safety of working women but a general denial of these laws on the part of the industrialists deprived women to take advantage of these laws. The similar practices are going on in Mirpur industrial zone where working women are totally unfamiliar with labor laws and therefore unable to make skillful use of legal provisions to their advantage.

Sukhi has implemented the project “Enhancing Women Workers Awareness of their Rights and Labor Laws” with the financial assistance of Aurat Foundation-USAID Pakistan. The basic theme of the project was to advocate women workers about labor laws, rights at the work place and equipping them with sufficient knowledge with which they can defend themselves against harassment at the workplace.